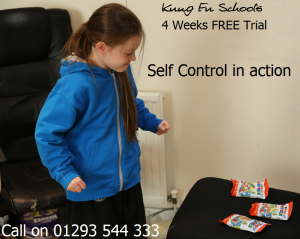 This weeks word of the week is:

Wikipedia states self control as:

the ability to control one’s emotions, behavior, and desires in the face of external demands in order to function in society. In psychology it is sometimes called self-regulation. Self-control is essential in behavior to achieve goals and to avoid impulses and/or emotions that could prove to be negative. In behavior analysis self-control represents the locus of two conflicting contingencies of reinforcement, which then make a controlling response reinforcing when it causes changes in the controlled response

The example for the children’s classes that Nick used this week was:

If you ask mum or dad for a biscuit, they say yes you can have ONE.

When you get to the biscuit tin you see TWO that you like.

How many do you take?

If you said TWO, you need to practise your self control a bit more.

The post Wotw-Self Control appeared first on self defence and confidence building for children and Adults.

You can find out more about which cookies we are using or switch them off in settings.

This website uses cookies so that we can provide you with the best user experience possible. Cookie information is stored in your browser and performs functions such as recognising you when you return to our website and helping our team to understand which sections of the website you find most interesting and useful.

Strictly Necessary Cookie should be enabled at all times so that we can save your preferences for cookie settings.

If you disable this cookie, we will not be able to save your preferences. This means that every time you visit this website you will need to enable or disable cookies again.

This website uses Google Analytics to collect anonymous information such as the number of visitors to the site, and the most popular pages.

Please enable Strictly Necessary Cookies first so that we can save your preferences!

Please enable Strictly Necessary Cookies first so that we can save your preferences!